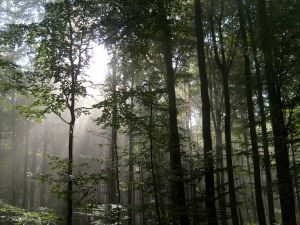 This review, by ISCAST fellow Ian Hore-Lacy, affirms Mark Poynter’s view about Australian forest management that “culpable high-level ignorance threatens not just forestry but the forests themselves.” According to Ian, this “begs for fuller attention by those concerned with stewardship of God’s creation in its providential aspects for human beings.” In summary: “This is a very important book which needs to be in the hands of anyone concerned about the ecological future of our Australian native forests and the rational management of an important sustainable resource. On both scores Christians need be concerned and engaged.”

Going “Green” is a wonderful but very depressing book detailing the decline in competent forest management mainly in Victoria but also other southern states in the last 40 years or so. Politics driven by populism have wiped out much of the hardwood timber industry for no environmental gain. Culpable high-level ignorance threatens not just forestry but the forests themselves, which begs for fuller attention by those concerned with stewardship of God’s creation in its providential aspects for human beings.

Mark Poynter is a professional forester who has worked in Victoria and Tasmania over his 40-year career. He is a Fellow of the Institute of Foresters of Australia. His previous book (in 2007) was Saving Australia’s Forests and its Implications.

The author gives a very detailed account, backed up by many hundreds of refences. Little of it was really news to me, but it is so good to have it all set out so meticulously, and the book is hard to put down. The Going “Green” of the title refers to the last 20 years of progressive acquiescence of forest policy to the ideological objectives of environmental extremism and hard-left politics, which are collectively and commonly described as “green,” though after intense fires exacerbated by those policies, “black” might be a better term.

Much of the political push, says Poynter, is to put ever more productive native public forest into national parks or similar reserves. This ignores the multiple-use management of state forests under professional foresters, removes the timber industry infrastructure which can be called upon for proactive and reactive fire management, and dumbs down the management generally. The change in colour on the map (for parks etc.) is not matched by improved management—more likely the opposite. Currently the Victorian state government is throttling the timber industry by being nearly a year overdue with the Timber Release Plan.

A second and related problem is fire. Despite findings such as those from the Royal Commission into the 2009 Black Saturday disaster—that about 5% of forests should be subject to cool fuel reduction burning each year—this is resisted at management level and we have events like January 2019’s intense and destructive Bunyip State Forest fires. Fuel reduction burning in national parks is even more contentious, setting up the state for widespread very hot conflagrations like those of 2003. Who will enjoy the splendid forests then—for some decades?

Instead of professionally managed control burns over wide areas we now have reliance on hazardous firefighting in response to outbreaks, supported very expensively by aircraft. The cost of all this now far exceeds the budgets for proactive fire management.

While a lot of native hardwood has quite sensibly been replaced by plantation pine since the 1980s, that is not the full picture. The replacement of abundant local hardwood timber, which has been harvested and renewed sustainably for a hundred years, with imports from Asia-Pacific countries is morally reprehensible where those developing countries have negligible environmental management. The employment and consequent economic costs in our rural areas are substantial as access to timber is progressively restricted. Poynter explains that this is both to satisfy urban sentiments and on account of spurious concern about particular fauna, which is often actually abundant.

Part of the problem is that the extent of multiple-use forestry and the impact of logging are misunderstood and misrepresented. In Victoria, under 10% of the public forest area is available and suitable for any kind of timber harvesting, while formal conservation reserves cover more than 50%. In NSW the proportions are similar. In Melbourne’s forested water catchments, a mere 12% is managed on an 80-year cycle of harvest and regrowth, yet this draws regular criticism.

Victoria’s best hardwood forests are made up of two species of eucalaypt (Mountain Ash and Alpine Ash) which are normally harvested by clear-felling coupes of 10–20 hectares and then burning the slash to give an optimal seed bed. Regeneration of trees and understorey vegetation is rapid, but photo opportunities for detractors are abundant in the short-term, and it looks like total destruction. In fact, this procedure is an effective facsimile of how those particular forests naturally regenerate after wildfires, except that there is a mosaic of different-aged stands across the landscape, from zero to several hundred years, with most harvesting at about 80 years.

Poynter says that “front-line protestors are mostly young and/or naïve followers (of centrally coordinated campaigns) primarily attracted to causes by social and lifestyle priorities,” and mostly urban. The media seem unable to distinguish plausible and populist superficialities from the substance, which is more complex and requires time perspective. Academics associated with the ANU Fenner School of Environment and Society, which has a close relationship with the Wilderness Society, have consistently opposed and misrepresented Victorian forestry despite its long record of professional management. Bad science begets bad policy.

In contrast to forestry practices in some developing countries, and in contrast to emotive campaigns from the urban green lobbies, all forestry here is sustainable as shown over nearly a century of harvesting and regrowth, varied according to particular species, and in any case the vast majority of forest area is not harvested. But it all needs to be managed in relation to fire and sometimes weeds and pest animals. The notion that “protection” of forests is incompatible with commercial human use of them has taken root without justification, and evolved into a flawed “conservation culture” requiring inexorable new national park declarations, often on the eve of state elections.

The author sets out the story of Forest Stewardship Council certification and why it has failed, with the escalation of lawfare against commercial forestry. Victoria’s current blocking of commercial forestry at high political level is particularly egregious. Tasmania’s politicisation of forestry and political deceit is epic. Professional foresters with experience of sustainable multiple-use are increasingly marginalised in favour of environmentalists who are accountable to no one.

A very full account of Victoria’s negligence in control burning and the results makes depressing reading. Poynter tells of the Wye River fire in 2015 which was hugely destructive due to incompetent fire-fighting and a stupid ministerial order early on, with any proper inquiry being suppressed.

This is a very important book which needs to be in the hands of anyone concerned about the ecological future of our Australian native forests and the rational management of an important sustainable resource. On both scores Christians need be concerned and engaged.

Closing down the Victorian hardwood timber industry and replacing it with imports would be a scandalous dereliction of responsible stewardship and an irresponsible reduction in the ability to properly manage the state’s forests.

It seems we have successive state governments who are readily manipulated on anything complex or rural—think energy, water or forests.

Ian Hore-Lacy is Senior Research Analyst, World Nuclear Association and is a Fellow of ISCAST. His honours and masters postgraduate work was in plant ecology.